“January in Abruzzo should mean waking up to winter mornings like this, a snow covered Marsican world” Peter Austin

The best of Abruzzo by event, sightseeing and food in January from the LifeInAbruzzo group.  A positive mix and space of all nationalities that simply love Abruzzo.

One of the things I like most about Abruzzo are the traditional Sagre e Feste. Some Sagre in Abruzzo are very old, like the Sage della Porchetta in Campli.

This weekend, on  Sunday January 5th, at Pettorano sul Gizio, the 58th (!) edition of the Sagra della Polenta Rognosa will take place. The recipe of this polenta is typical for Pettorano and its environment. The corn flour is enriched with pork fat, i.e. sausage and ventricina,  and a typical local ingredient is added, the “mugnoli”, a herb that grows in the surrounding mountains. The polenta is made in a copper pot, then turned over on a wooden board and cut into pieces with an iron wire. Each piece of the polenta is then layered in the original pot with condiment of meat and vegetables. After another round of cooking, the polenta is eaten in small portions with some grated pecorino on top. The whole process of making the polenta takes about two hours. Maybe it’s for that reason the polenta is called ‘rognosa’, ‘difficult’ in a figurative sense. But it could also be called ‘ragnosa’ (‘scabby’) because of the appearance of the polenta, with its rough peel.

The menu also includes pizzas, pecorino, wines, desserts and other typical products from all over the territory. And it’s very likely that good old Befana will pay the town a visit, as the 6th is her feast.

The festival will take place in Piazza Umberto I, right in the center of the village, or indoors in case of bad weather. Like previous years, the historical train La Transiberiana will ride from Sumona to Pettorano v.v. Let’s hope there will be some snow and wonderful winter scenes to look at!

I love this traditional event as it embraces the generosity of the Abruzzesi,  a compassion for those less fortunate and a willingness to eat together.  La Serenade delle Chezette is busking Scanno style, through a simple song  your reward is a meal and company in the deep dark winter.  It takes place on the eve of Epiphany (5th Jan), villagers sing this traditional folk song under the windows of the girls & women of the town that begs for food until they receive a promise of a delicious dish or ingredients tomorrow. The next day the singers go and collect the fruits of their serenade and two days later the donors and the singers go to a local restaurant and eat together.

One of my very favourite Abruzzese celebrations sees each community forgo the usual January huddle inside, getting out, and socialising,  drinking wine and eating  grilled  sausages, dancing around  a large pagan bonfire in the village or town piazza and if you are lucky a enactment of this Saint’s passions that was traditionally performed by  ‘i Sandandonijre’ (beggars and itinerant musicians and actors).  Each village and town has a slightly interpretation but look out for posters advertising how they will celebrate and attend!

Sant’ Antonio’s popularity in Abruzzo is down to the simple fact that he is the patron saint of small-holders & farming folk, which includes being the protector of the glowing embers of the hearth that keep a house warm and hot food on the table. He’s the protector of domestic animals that includes those nimble footed mules who still remain the chief loggers high in Abruzzo’s mountains.  He too is the one that is looked to for help with infectious skin diseases which has an interesting history dating back from when pig-fat used to be a balm that was rubbed on all.  Antonio is the patron saint of swine herdsmen, bringing the pork in from the cold and changing how it was perceived in the early 2nd century AD, from demonic to acceptable.  In one of his supposed spars with the devil it was a piglet that stole glowing embers from the fire for life on earth.

He’s quite easy to spot when admiring church sculptures or frescoes; there will be a piggy, perhaps a little bird like a sparrow, and he will be depicted generally with a long flowing beard (think hermit from his monastic times in the desert) and there will be either a t-shaped stick or a bell.

Fara Filorum Petri has a spectacular event on the 16th January. The farchie are built in the month of January and then lit by the villagers. If you go make sure you don’t wear any clothes that you are too precious about as sparks do fly! Don’t be surprised if you are patted by a stranger putting the embers out that have fallen on you.  As if the sight of these huge farchie arriving,  going up and being burnt isn’t enough to see, there is also mulled wine and some food to be had. 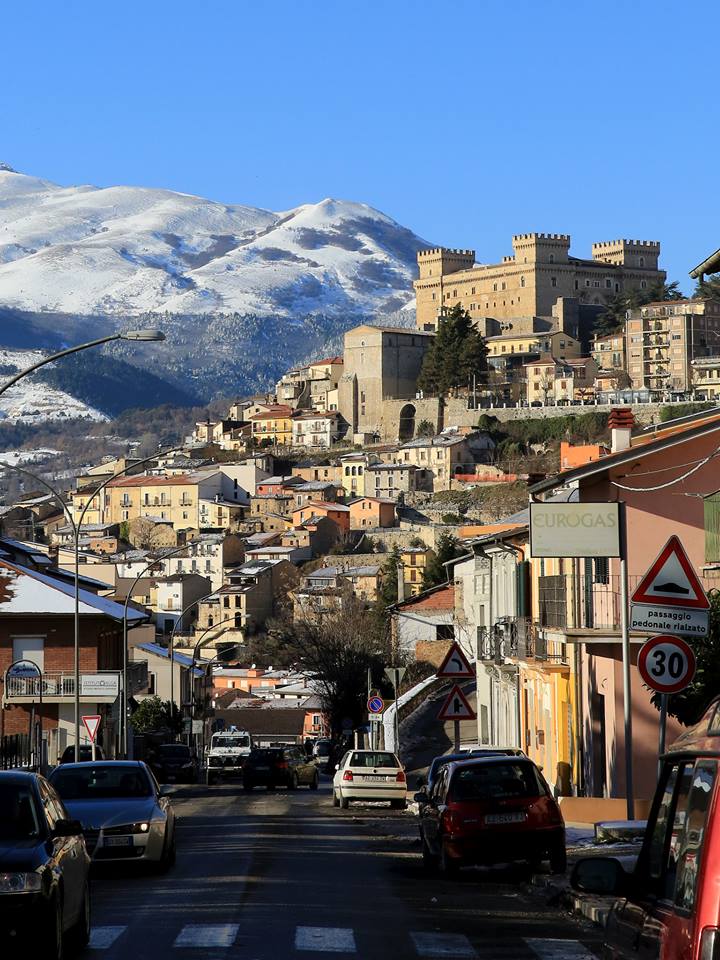 If you love real Abruzzo food, absorbing history and amazing views, visit the Museum of Sacred Art that’s housed within Castello Piccolomini in Celano. Then go for lunch at Ristorante Cittadella in Via Michele Carusi. It’s only a few minutes walk between the castle and restaurant, and the view over the Fucino lake basin to the surrounding mountains are breathtaking from both places.

Tagliacozzo in the Snow

January is a fantastic month to visit Tagliacozzo (where I live), as with snow it looks looks completely magical.

January is a great month for walking along the beach in Fossacesia in search of sea glass. Winter’s windy cold fronts kick up some pretty intense waves that move the white pebbles and uncover deeper broken glass that has been honed down to soft-edged gems that can be used in surprisingly creative ways. The Adriatic coast is especially rich in sea glass for some reason, lucky for me! 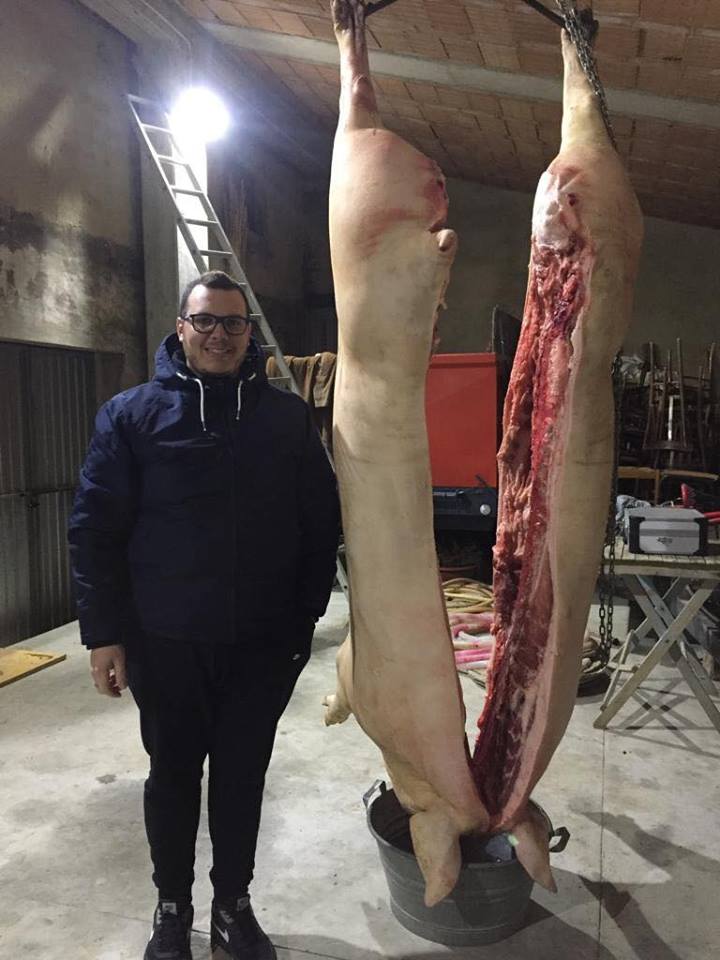 The January Pig slaughter (lu ‘ccite ​​de lu porche) is not just a tradition but a real food contingency: pigs are a symbol of abundance and ensures food provision and well being for our families throughout the year. 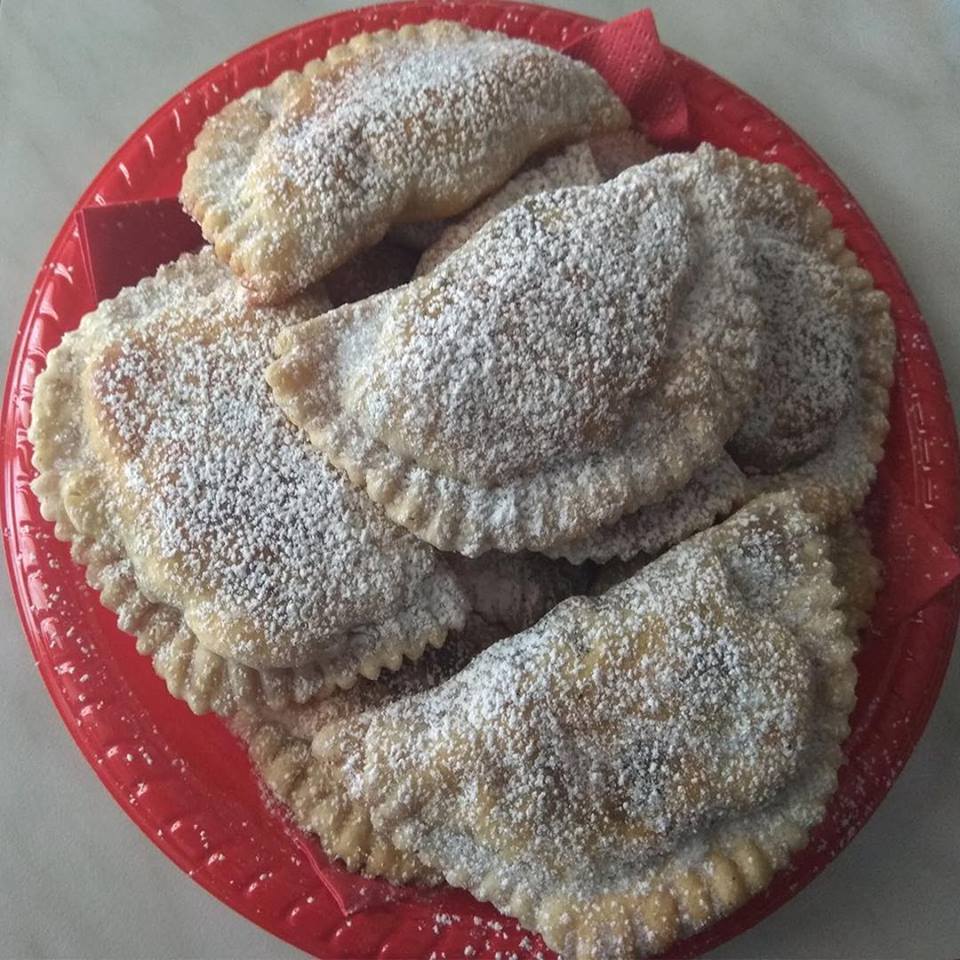 These are what we make to escape those long dark wintery nights in Prezza and are also our local Christmas pastry. They are stuffed with crushed toasted almonds and chickpeas coated in mosto cotto & dark chocolate and encased in a vermouth pastry. In Italy they are known as ceci ripieni”, but here in Prezza we call them “cavceun”, here’s my cousin Mimina’s recipe. 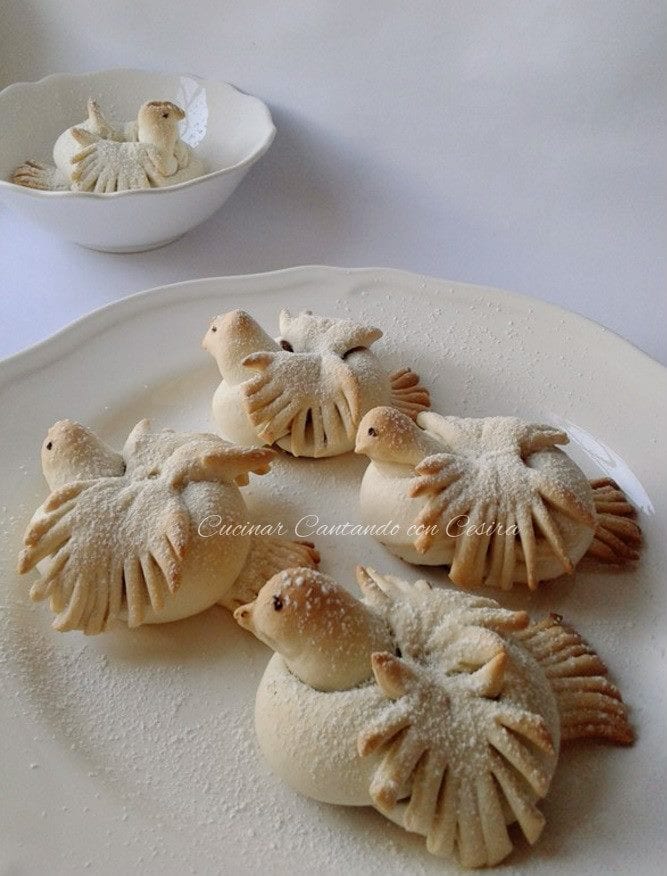 My favourite January snack are these tasty stuffed little pastry birds that were designed to be a portable feast of the Holy Spirit in thanks to the i Sandandonijre (actors, musicians and beggars) for their performance of the passions of San Antonio Abate on his feast day.

Receive all our latest posts, offers and giveaways straight to your inbox
Your information will *never* be shared or sold to a 3rd party
84
SHARES
ShareTweet