Home Life & CultureAncestry Collelongo & the Werewolves that Washed in its Fountain

Collelongo & the Werewolves that Washed in its Fountain

My grandfather, Luigi Carmine Guanciale left Collelongo the province of L’Aquila Italy when he was 17, and arrived in the US on March 13, 1905 my birthday.

My grandfather’s stories were amazing, and we were so lucky to have him and my grandmother living with us. We had a two-family house and they lived upstairs. Our favourite were probably the werewolf stories. He said he’d seen them many times. Once he and his brothers were walking home from a party through the woods, and they saw two werewolves ahead of them. They hid behind trees so they could spy on the werewolves, who were wearing men’s clothing and talking to each other. The werewolves had to go to the village fountain too to wash their faces before going out for the night!

Another story was how to keep the witches away, to do this you needed to hang a rabbit pelt on your front door. If a witch came by one night, she had to count all the hairs, and by the time she finished, it would be morning and she’d have to leave.

He also had a great fondness for snakes, the area of Abruzzo is famous for serpari – snake charmers – like the ones you see in Cocullo. All over Collelongo and the towns around it, many things are named for the snake goddess Angitia, worshipped by the Marsicani, the indigenous people of that area. My grandfather could find a snake in five minutes if we went to a park or in the country, and he told us to not be afraid of them.

No one in our family had ever gone to Italy, and my grandparents never had to opportunity to go home – WWI, WWII, the Great Depression, four kids – it was impossible to afford it. Many years later, I was working as a freelance graphic designer at Simon & Schuster, and one of the other designers, mentioned that she had just come back from living in L’Aquila for three years. Her parents came from a small town outside L’Aquila, but met in the US and married. The decided to move back and their three kids went with them, she had met a guy there and married, and they moved back to NYC.

I started to think about how I could contact my relatives there. My grandfather had never mentioned the name Collelongo, but he had talked about L’Aquila. So I asked Maria the designer to help me write a letter in Italian, and I included some photos. She mailed it to her older sister Anna who had also married someone from the area and stayed in L’Aquila. My grandfather’s last name was Guanciale (yes like the pig cheek bacon), which is not very common, so Anna started by calling the first Guanciale she found in the phone book. This person said, “yes, I know who her family is, but you should call Clelio Guanciale, who is the mayor of Collelongo.” Anna called Clelio and they figured it out – Clelio’s grandfather and mine were first cousins.

About a month later, I received a 10 page letter from Clelio, full of photos of our family and the town. It was incredible. My mother started crying when I showed her the letter. So I made arrangements to go there with my husband Robert and I started studying Italian with someone from my neighborhood (I live in one of the major Italian neighborhoods in Brooklyn). I only had 10 days of vacation then, but we flew to Rome, rented a car and drove to Avezzano, where Clelio lives. He’s a doctor, but he still had two terms as mayor of Collelongo, where he was born. It really was an incredible trip, meeting more and more Guanciale cousins. Robert and I were walking down the street in Collelongo one afternoon, and I heard someone calling “Signora Guanciale.” Robert turned around and said, “Annette, that guy looks exactly like your brother Bob!” It turned out that he was my cousin Angelo, and his grandfather and mine were brothers. We also met many cousins on the side of my grandfather’s mother, whose name was Bellmaggio. So in Collelongo, which has about 1,200 people, I have about 50 or more cousins. 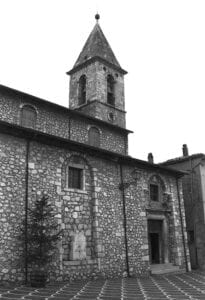 The commune is a great place to find information about relatives if you know the town they came from. I don’t know the modern system, but in my grandfather’s time, births and deaths were recorded in books by year. And they have a wealth of information – parents’ names, siblings names, address, how much land they owned, name of the midwife, etc. I was extremely lucky because the first time I went there, Clelio was still the mayor. He showed me two huge leather-bound books that he had restored in Florence. They were records of every family in town, and they were records of the Guanciale family back to 1257! The first Guanciale, who spelled the name Guangiale, was from Le Marche. Funny coincidence since that’s where my house is now. It listed every family, names of parents and siblings, how much land they owned, types of animals and how many, and just about every detail you could imagine.

Another cousin, Francesco Bellmaggio, was a university history professor, and he made a family tree going back to that time that’s a work of art. So I was able to learn a lot about the family. My cousin Angelo also found a big box of photos that my grandfather had sent to his family over the years from the US – marriage photo, photos of all the children.

I try to visit every year when we go to our house in Le Marche. It’s about a three-hour drive. One of the best trips was going with my mother in 1995. My grandfather came to the US (and settled in Syracuse, NY) with one of his brothers. The brother also married a woman he met in Syracuse and had two sons. One of them, Anthony, came on the trip with his wife. Clelio rented a small house for us in Collelongo, and when we drove in from Rome, my mother and her cousin burst into tears when we saw the Collelongo sign! It was a magical trip. My mother and her cousin were so happy and the cousins took turns having us over for lunch and dinner. We saw the sites of my grandfather’s stories, about mushroom hunting or where he saw werewolves every full moon, or how to turn witches away from your home.

We were driving around with Angelo one Sunday, and drove up one of the mountains, San Elia, to a rifugio. A big group of his friends were there, all retired school teachers like him. They had been out gathering these mushrooms. When I told them that my grandfather had told me about this, they all started crying, so happy that I knew the old stories. Of course, this was an occasion to bring out a bottle of wine, at 11:00am! We went back into town to a bar and sat outside drinking prosecco and later ordered espresso. They all watched me carefully when I started to drink it, and one said, “She doesn’t take sugar! Just like all of us in Collelongo!” Again, more tears and celebration.

When we visit we stay at Locanda Torre del Parco. This is a beautiful little hotel with six rooms and an excellent restaurant in a fortress built that was in the 10th century. The first time, the moon was full. I went up to the roof terrace at night, which overlooked the town fountain where my grandfather said the werewolves came to wash their faces before they went out for the night!

Receive all our latest posts, offers and giveaways straight to your inbox
Your information will *never* be shared or sold to a 3rd party
228
SHARES
ShareTweet

Annette lives in Brooklyn, NYC and is the Managing Editor of ARTnews. Her maternal grandfather came from Collelengo (AQ) Abruzzo.

Annette, Great story! I am planning a trip to Collelongo this fall with my dad, whose parents were both born there. Can anyone access the records to find out more info on their ancestors?

The story I heard was very scary – the teller is walking home, in the night, and it's very dark. At a corner, they see a big dog, sitting by the road. It sits quietly, but it has human eyes! The teller walks by, as calmly as they can, and continues down the road. Just when they think they are safe, they turn a corner and the dog with human eyes is there again, sitting and watching.
My nonna was from Castelli.

You Grandparents were wonderful souls. And you were really lucky to have them and their histories in your life. I enjoyed reading about your family 'reunion'. Thanks for sharing & Happy New Year!

Annette, what a great story about the Guanciale La famiglia!. You know you mentioned that our name may have had a "g" instead of a "c" in it a long time ago, however I believe that they used to scribe their "c's" in this manner. I only say that because my fraternal grandmother's name was Mancini and the "c" appears just like a "g" in all of the older documents that we have seen. I think it was just a fancy way of writing the "c". Anyway, thanks for sharing the information and we will all have to get together… Read more »

The photos are beautiful! I have visited Collelongo many times with my father and sisters, brother and their children and spouces. Have always enjoy seeing everyone.