Home Skiing & Winter Sports Do As the Romans Do: Take a Family Ski Holiday in Abruzzo

It’s hard to think of a better place than Italy’s Abruzzo to take children to for their first ski.  Here kindness and adoration of ‘little ones’ guarantees not just a smile, but a rewarding hug for the effort and  a ‘slow’ snow plough by spindly foal-like legs that are itching to speed down the nursery slope.

Skiing in Italy guarantees that Mum & Dad can be equally impressed by soul-soaring slopes during the day alongside food and fine indigenous wine adventures apres-ski.   Fortunately, if you ignore the Alps and head south to Aremogna, the preferred Abruzzo ski destination for Romans & Neapolitans, a budget Italian family ski holiday doesn’t mean having to slum it!

“I’ve spent my winter holidays in Abruzzo for as long as I can remember. As a child I would accompany my Grandmother and pick up freshly baked pizza in Pescasseroli ready for a day at Aremogna where my Uncle taught me to ski.  Every year I look forward to flying home to Napoli and then the short drive (1.5hr) for beautiful slopes, great views and of course, incredible, genuine food” Fede Rilli, Pasta Bites

For our school half-term ski-break, we based ourselves in the small town of Roccaraso, one of the four towns that is just a short shuttle up to Aremogna, the largest ski area in central Italy. 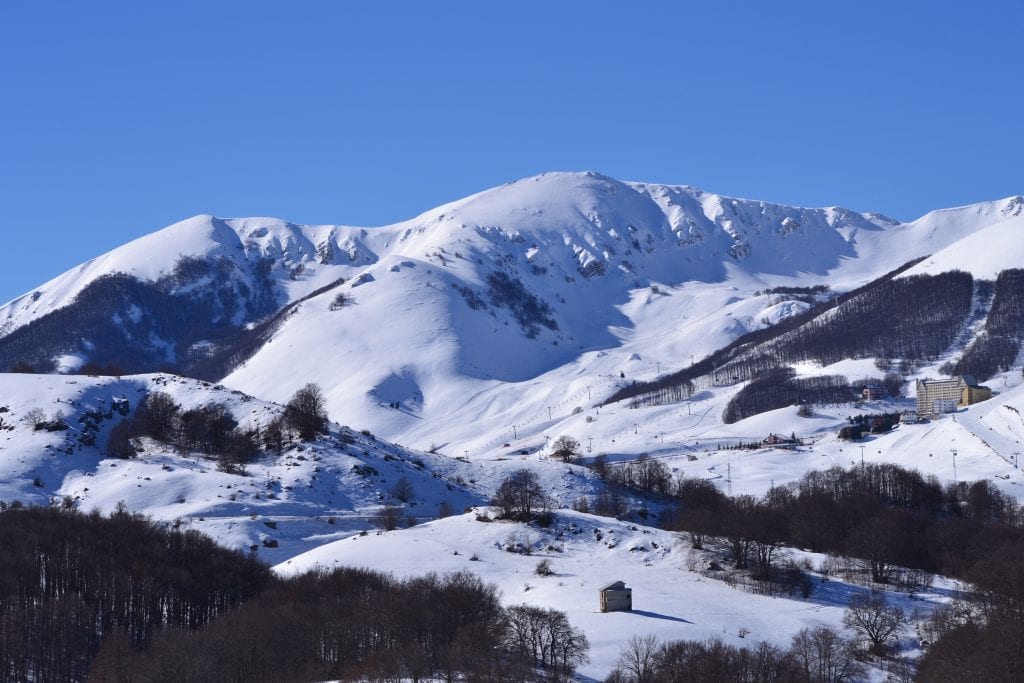 The town sits between Rome and the Adriatic Coast,  up high in the majestic Majella National Park, whose Amaro peak is the Apennines second highest mountain.  Formerly a picturesque pastoral town whose claim to fame lay in Hannibal using its mountain pass to push his elephants down to Rome, Roccaraso’s life as a ski-base began when the first trains pushed through the Apennine mountains at the beginning of the twentieth century and Italy’s sporting nobility opened their eyes to Abruzzo.

Sadly 99% of the town was lost when, as a tactic to slow down the allies descent on Rome, the Nazis blew up their former Gustav Line headquarters during their departure.  Its modern incarnation lacks the medieval charm of nearby Pescasseroli; it won’t make the Borghi Belli (Italy’s official beautiful village list), but the town manages to have everything within walking distance that a family on a ski-holiday can want outside a day on the slopes: an ice-rink, a snow park and sledging, great places to eat, small bars, and the very special sweetie come cake shop, La Cioccolata di Gio to revel in thick gloopy hot chocolate.

We stayed half-board at the family-run 3* Hotel Trieste, highly recommended for comfortable spacious family rooms and enough abundant local dishes like grilled scamorza cheese and truffle sauce to satisfy any hungry skiers.   The hotel is run by the Del Castello family, the grandfather who first built the hotel 50 years ago is now the safe pair of hands in charge of the free return shuttle that takes guests up to ‘Areamogna’ and your preferred pistes for the day.  The restaurant has those mystical old-school waiters who remember your preferred coffee from the previous morning and ask if you would like another.  Dinner is 3-course  with wine accompanied by an enormous vegetable buffet table that satisfied even our fussy little eater.   We bumped into one other British family at the hotel on their annual ski-holiday.  They’d returned again after their first visit the previous year and praised the sheer diversity of runs that were suitable for each family member, the great ski school and creche at  Campo Scuola Sci Pizzalto for their youngest as well as the kind staff of the hotel. They were planning to return again which speaks volumes on the attraction of this ski-destination so close to Rome!

Our skiing at Roccaraso centred on the Pizzalto resort that is part of Aremogna.  The area offers an incredible choice of 65 pistes to chose from that stretch for 130 km.   For the advanced skiers, there are 11 black runs, with the rest split between red and blue served by 27 modern ski-lifts.  For beginners, there are only 4 green pistes included in Aremogna’s ‘Skipass Alto Sangro’ but that is probably plenty for an absolute beginner on their first try out.

An average of 350 cm of snow falls each winter for a ski season that lasts from December
until April.

Whilst our then 5-year old was being patiently mentored by Giovanni in the nearby ski and snowboard school of Scuola Schi, we experimented with the gentler runs at Pizzalto, which involved taking the well-run and easy to use bench lifts, from the top of which we looked out onto a pure white winter wonderland of surprisingly largely untrammelled snow framed by a splash of ochre from the beech trees.

The condition of the snow was excellent; most of the skiing at Aremogna is above 2000 metres so the snow cover is generally reliable although there are snow cannons and equipment can be seen in case a top-up is needed. A combination of not overly taxing blue runs finishing with a long sweeping piste that takes you past the ski school back to the café and entrance to the ski lifts we found the most satisfying.  This fairly long run past the primeval beech tree forests that 5km down the road are now a UNESCO heritage site offers great views.  We were intrigued to see a basic trestle bar midway down selling beer and, more curiously vodka, which was tempting but we resisted the urge!

What we revelled in most at our time at Roccaraso was the feeling of space, uncrowded slopes with just a few Italian school-kids on class breaks and a scattering of Neapolitans, French and German skiers of every age.   The indulgence of not having to queue for anything was a luxury that those who offer half-term activities can only dream of delivering!

How to Book your Abruzzo Ski Holiday

Ski-Abruzzo provides complete ski packages based at some of Abruzzo’s best ski-hotels, after the 9th January a 3-night break can be as little as 100 euros per person!

Flights: Own arrangements to Naples, flights to Pescara or Rome are also possible

N.B. A local sojourn tax is payable directly to the hotel. €2 per person per night per adult.

Skis, sticks and boots €12 per day. Helmets are compulsory for children aged 14 years and younger.

Private ski lessons €45 per hour for one person – each additional person up to a maximum of five per class €15 per hour.

Receive all our latest posts, offers and giveaways straight to your inbox
Your information will *never* be shared or sold to a 3rd party
343
SHARES
ShareTweet

My Nonni From Abruzzo – Lily Lapenna

A little bit of saffron harvest magic… I love th

The only place in Italy you’ll be served meatbal