There are so many places in Abruzzo worthy of a visit but you won’t read about them in the guide books. It’s been a while since I’ve gone off to explore without any specific destination. Any time I have, I’ve been pleasantly surprised with the hidden gems I would find. Yesterday I discovered Fano Adriano, a town with only 270 registered inhabitants (about 70 actually live there).

The town still shows its scars from the recent earthquakes and I counted more cats on the steets than people. When we arrived it was going on 2pm and we were hungry. A sign with arrow said “ristorante tipico” so we followed it only to find a restaurant that appeared to have been closed for some years. We decided to back track to the bar we saw at the beginning of town. On our way back we came upon a statue of a woman holding a sign next to an open door.. I peeked inside and could just make out in the dark a very elaborate nativity scene. I got my flashlight ready on phone and decided to enter the cold dark room anyway… as I did my heart skipped a beat. All at once lights everywhere turned on, and everything became animated with music and sounds coming from different directions. Even snow fell over one part of the miniature town! That was a pleasant surprise…

But we were still hungry so on we continued on back down to the bar. It was a bar slash very basic alimentary/bakery/deli store all in one, run by a cheerful older man and his (very) cranky wife. He made us sandwiches and suggested we take them three km up the road to the Eremo dell’annunziata. He said the view was incredible and boy was he right! There are 4 picnic tables set up. A family of four was just finishing up their lunch and left so we had the whole place to ourselves. The eremo was closed but that didn’t matter. There was so much beauty to take in outside… An incredible 180 view of the mountains that was just impossible to photograph. Definitely put this place on your list to visit! 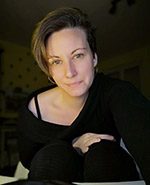 Rose Morgan a is a self taught graphic designer from Boston, MA. In 2006 She moved to a small hilltop town in Italy where she lives a quieter life. Things still can get hectic though as she juggles her own design business while raising her two girls 6 and 4.

Where is Fano Adriano

Receive all our latest posts, offers and giveaways straight to your inbox
Your information will *never* be shared or sold to a 3rd party
171
SHARES
ShareTweet

The L’Aquila Earthquake: The Courage of Those Who Remain