How we are Creating the Sulmona Valley Loop

Almost all of us who love Abruzzo find great peace and delight in its magnificent landscape. Being immersed in natural history, amongst ancient mountains and forests, lakes and soft valleys, brings us happiness and a sense of wonder and place. It felt like that from the moment I arrived – here was a deep pool of well-being!

And the best way to infuse your spirit and boost old bones? Take the day, pull on your boots and go for a walk. A simple tonic that, time and again, we turn to for calm and rejuvenation. Abruzzo is a place that pulls at our deep instinct to wander; to become a part of the world we move through.

So, you step from your front door and off you go, don’t you? Hmm… maybe something so simple is not as accessible as it seems? Perhaps it’s a bit overwhelming – all those paths and peaks and tracks in the woods and, actually, some help and structure could make a great difference. I felt that too back in 2007.

I looked for a guidebook and good maps; routes where I could lose myself in thought and but not my way, wild and splendid places to discover in the knowledge that I would return home safely. But for me, not then an Italian reader, well, there wasn’t a guide and the maps were (and still are) patchy. I decided to write a guidebook.

A delightful labour that took me to far corners of the region, to the highest points and through the remotest forest. I learned so much, got very fit and lost myself so many times I couldn’t tell you but, after two years, it was done. In 2011, “Walking in Abruzzo” was published. I was very happy to be helping others to their own discoveries. It did well; we sold out and reprinted in 2014 but I knew it should be more, that I had scratched the surface. So, I wrote a new edition, a third bigger, and it was published in 2018. I learnt that, when you explore, you discover evermore. Where was I going next?

Well, to my own back yard! I live in the Sulmona Valley, in the heart of Abruzzo. It’s a marvelous place, a fertile basin and a crossroads encircled by mountains. For years I’ve walked those mountain slopes, from peak to peak along high ridges and, as I wandered, the simple idea of making a circular route to run continuously around the perimeter of the basin grew stronger. I talked about it with my friends in the Alpine Club (CAI Sulmona). Of course, I wasn’t alone and it wasn’t a new idea. 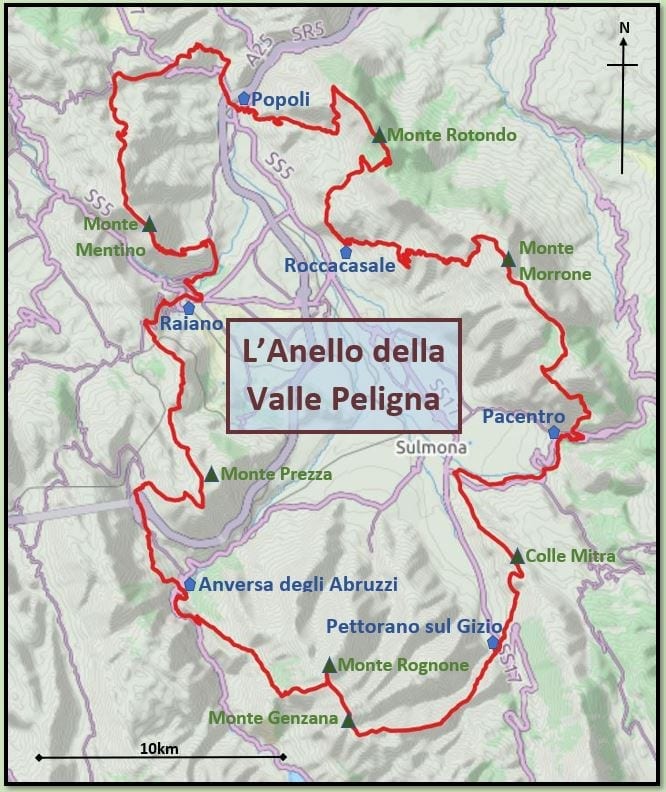 It’s a natural notion; we hold a deep desire to make journeys, to explore our unfolding surroundings on foot, to connect by retracing the ancient ways. The paths and tracks are there, etched into the landscape over millennia. But no one had documented them, made the idea accessible, described a way. We decided to do it, thinking not only of the path itself but of how it should become a resource both for residents of the valley and for the visitors we hope it will attract. We feel that low-impact, low-cost projects like this are key to a future ‘green tourism’ that Abruzzo is wonderfully placed to lead on and to benefit from.

Work began in 2018. We sketched a potential route – the result of our debated knowledge of a hundred tracks, lanes and paths; of dozens of mountain tops and of the ancient villages that lie around the perimeter of the valley. We mostly agreed on the way and, throughout 2019, surveyed every meter; to see how things are on the ground. We walked, measured, checked, plotted, photographed and considered the options. Then the route was settled – a 6 stage / day circuit, 133km long, taking in almost all of the valley skyline and linking the principle villages and castles along the way. Not always an easy path to walk, mountainous in many places, but true to our vision and an exhilarating and beautiful adventure that can be accessed, at least in part, by everyone.

You might think that was the hard bit. Well, of course, no. Then came the describing phase that we have recently finished. Weeks of design, map-making and writing, in Italian and in English, have resulted in 12 detailed descriptions – one for each stage in Italian and another in English. These are published now on the Sulmona Valley Loop website – www.anellovallepeligna.it – which we also designed and built. And, for the time being, you can download them for free!

We are pleased with what we have created but the major effort still lies ahead. From now our progress will be determined by funding!

I’ve walked and climbed in the mountains all over – in particular, the Alps and the Apennines. Though happy, myself, to quit the trail and navigate with a map and compass (let’s say GPS these days) I’m always comforted by a cairn, a painted waymark or a lonely signpost. In fact, I love them! Many people would really like but are not confident to take to the hills without the reassurance of signs and way marks. Our path will never become widely popular until we mark it and maintain it to the highest standards.

This will take time and money. Right now, we need cash to buy signs, stakes, paint, information boards and to pay, in part, to have them installed. And we plan to publish paper guidebooks and a map for the route – for some not everything has been delegated to the laptop and smartphone…

We must forge relationships with comunes, provincial and regional government, National Park authorities, tourist boards, landowners, nature reserves, newspapers, blogs, regional development funds, publishers, societies and other interest groups. You get the picture; it will be complicated and take a while. Working with them as appropriate, we will make funding applications. We don’t need a lot of money really – an investment in a green project like ours is relatively small and will pay back in a long-term, sustainable way. We will raise some ourselves through the sale of route description downloads but it won’t be enough. Until we are funded, further phases are on hold.

Visitor infrastructure is important too. From the outset, we considered how people, particularly those from outside the area, will walk the circuit. Each stage starts and ends in a village with at least a bar, restaurant and somewhere to sleep. Each of these villages is connected to Sulmona by bus and, in some cases, train. Our goal was a loop accessible without a car for someone staying in Sulmona and walkable, stage by stage, not necessarily on consecutive days. One here, one there, maybe two or three over a long weekend… Sulmona, itself, is well connected with Roma, Pescara and l’Aquila by rail and with Napoli by coach. Big tick for fans of public transport!

Opportunities are here to create businesses to serve walkers. Already we’ve heard from people who are keen to establish B&Bs in villages along the way. Bars and restaurants too will benefit, some of which have a marginal existence. A little boost may make the crucial difference to a community in decline. And who will seize the moment to set up an accommodation booking and luggage pick-up and drop-off service? We’ve modelled the costs and benefits to the valley in preparation for funding applications and even a pessimist would be smiling.

L’Anello della Valle Peligna – the Sulmona Valley Loop – is a project for our times. Our difficult times as we seek to recover from the virus. It’s been great so far and we’re excited about the future. In 2022, CAI Sulmona will celebrate the centenary of its founding. What a perfect memorial we are creating – as someone said, with a bit of license, 100 kilometers for 100 years!

[Go to our website – www.anellovallepeligna.it – for lots more about the Sulmona Valley Loop including photo galleries, videos, overviews of each stage and detailed descriptions to download. And check back soon or like our Facebook page for news of our crowdfunding initiative!] 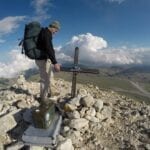 Stuart Haines is a walker, mountain lover, guidebook writer, project manager and occasional viticulturalist. His explorations of the remoter corners of central Italy began in 2004, following many years of climbing and adventuring in the Alps, North America and his native UK. Since 2007 he has been based between Bristol, England, and Casa La Rocca, the country house in the heart of Abruzzo that he renovated with his partner, Hil.

Receive all our latest posts, offers and giveaways straight to your inbox
Your information will *never* be shared or sold to a 3rd party
275
SHARES
ShareTweet

Sunday Live in Abruzzo: Celestine V: His Life and Legacy

Featuring Top 30/47 of Walking in Abruzzo & Discovering its Wildlife