The Start of an Abruzzo Christmas Feast – Minestra di Cardi

Across Abruzzo’s valley and mountains, the Christmas lunch feast more often than not begins with Minestra di Cardi; this is peppery Cardoons that have been cooked in a rich chicken broth with little meatballs. Like so many Abruzzo soups it is substantial dish which can be eaten as a dish in its own right and is perfect for a late winter supper.

Cardoons and particularly Cardoon Soup have remained a popular favourite with Mediterranean cultures since Greek and Roman times.  Outside Italy, for example in the USA, they are rarely found in the supermarket today, but are becoming frequently available more & more at farmers’ markets. You’ll found them often bound and wrapped in straw as before Cardoons are sent to market, their stalks are blanched by tying them together and wrapping them with straw for 3 weeks.

This winter cousin to the artichoke can be picked & eaten from the end of Autumn across the Winter season, it literally has a  5 months growing season in which it can be picked; as it gets warmer the stalks become less peppery and more bitter in taste,  and it’s soon really obvious when to stop picking.  In appearance they look similar to giant ribbed celery, but the taste is artichoke and you can alternatively steam or braise them.

Here’s the age-old Famiglia Di Crescenso recipe for Abruzzo Cardoon Soup all the way from Guardiagrele, Chieti, still much loved by family members Rosanna & Giuliana from Chicago who have contributed this piece! 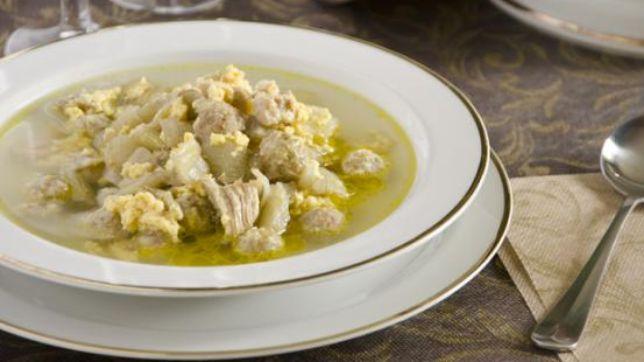 Ingredients
Instructions
3.5.3226
Enter your name and email and get the seasonal newsletter... it's FREE!

Receive all our latest posts, offers and giveaways straight to your inbox
Your information will *never* be shared or sold to a 3rd party
404
SHARES
ShareTweet

Keeping everyone warm by jamming around the fire i

The best remedy for the January blues spend an eve

What do you do with your best laying hen? You take