Listen to a TV or Radio show with an Italian in it and you’d almost be surprised if he wasn’t called Tony, the most famous being Tony Soprano perhaps.  In Abruzzo, and many regions further south, Antonio is one of the most common boys’ names and true to form named after a Saint, not the more internationally famous Padovani Saint but the Egyptian, Sant’ Antonio Abate.

Sant’ Antonio is the patron saint of small-holders & farming folk, which includes being the protector of the glowing embers of the hearth that keep a house warm and hot food on the table. He’s the protector of domestic animals that includes those nimble footed mules who still remain the chief loggers high in Abruzzo’s mountains.  He too is the one that is looked to for help with infectious skin diseases which has an interesting history dating back from when pig-fat used to be a balm that was rubbed on all.  Antonio is the patron saint of swine herdsmen, bringing the pork in from the cold and changing how it was perceived in the early 2nd century AD, from demonic to acceptable.  In one of his supposed spars with the devil it was a piglet that stole glowing embers from the fire for life on earth.

He’s quite easy to spot when admiring church sculptures or frescoes; there will be a piggy, perhaps a little bird like a sparrow, and he will be depicted generally with a long flowing beard (think hermit from his monastic times in the desert) and there will be either a t-shaped stick or a bell.  For those who may have lived in the UK South East, perhaps it is my vivid imagination, but could it be in his honour that the famous ice-cream company Tonibell is so named?? 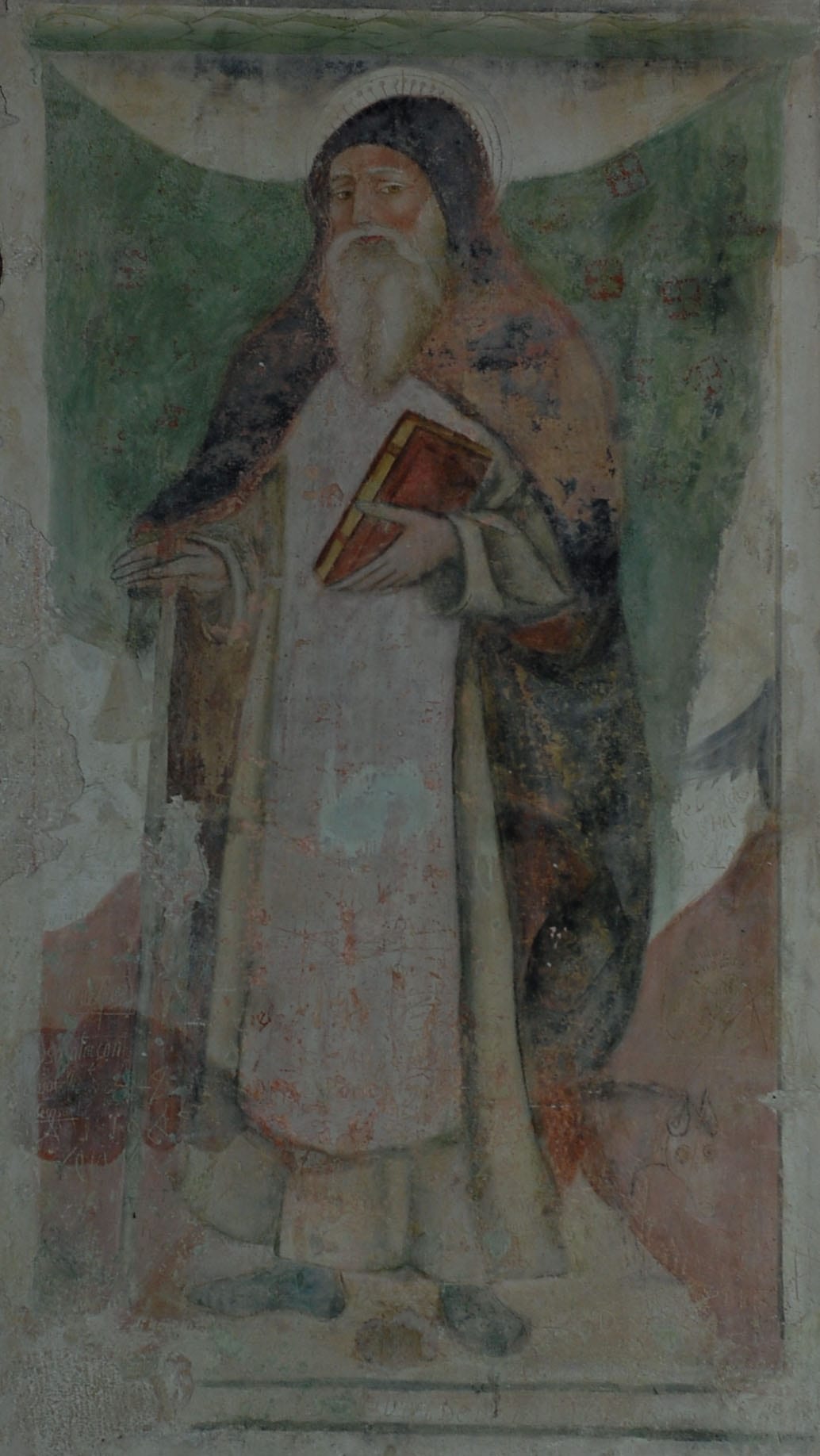 His feast day of the 17th January is thought to have been taken from earlier pagan festivals held pre- & post-solstice when fires were lit to ward off evil, welcoming the sun that would nurture crops’ new shoots. Leading up to the day in many Abruzzo towns & villages harlequin-like bands visit local houses and restaurants singing traditional jolly songs dedicated to the Saint and re-enacting his battles with the devil. 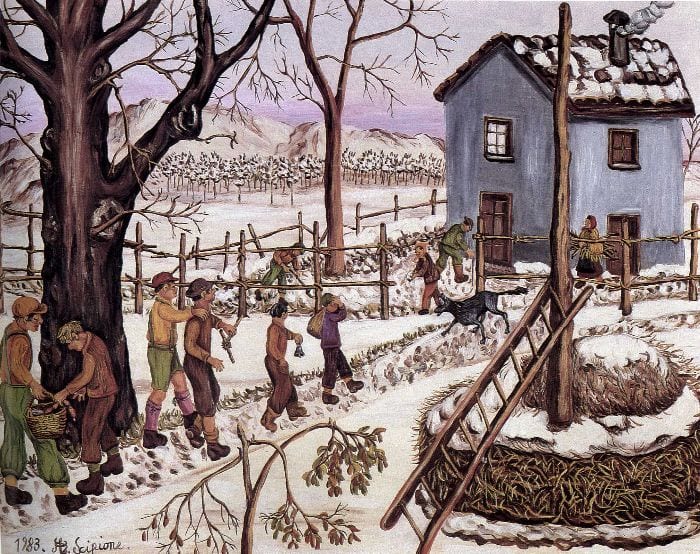 Many fires are lit on the 17th but do look out for those that take place the preceding weekend.  Involved in the ceremony are the farm animals who are either bought to be blessed by the local priest or he’ll go and visit them with blessed bread of which they are given a piece to help ward off ailments over the coming year…; go to many a stall, stable or shed after this date and you’ll find a St Antonio blessing pinned to the wall.  Traditionally the housewives, the so-called angeli di fuoco, as it is they that tended the fire, would visit the fire to take some blessed embers back to the house to help ward off the remains of winter – some slightly older folk still do.

One of Abruzzo’s most famous San’ Antonio celebrations is held down in Fara Filiorium Peti in Chieti which becomes a 2-day event, where giant multiple “farchie” are lit, with fireworks to match.  We go to Tossicia,  when the fire is lit outside its famous church, Chiesa San Antonio.  Little pastry birds called uccelletti are baked, stuffed with grape jam and dipped into a version of Abruzzo mulled wine and served, whilst sausages sizzle on grills over the embers of the fire, to be in eaten in a roll with foije, a type of Abruzzo sauerkraut which is Savoy cabbage cooked in wine with garlic and chilies.

Receive all our latest posts, offers and giveaways straight to your inbox
Your information will *never* be shared or sold to a 3rd party
161
SHARES
ShareTweet

I really want to be in Abruzzo for this feast sometime.